Here at the KU AAP we sure are proud of our students. They truly are what make our program so great.

To show our appreciation and to hear more about their stories, the “Hawk Highlight” series was born.

In this week’s Hawk Highlight interview, learn about Yuhan, from China, studying Geology here at the KU. 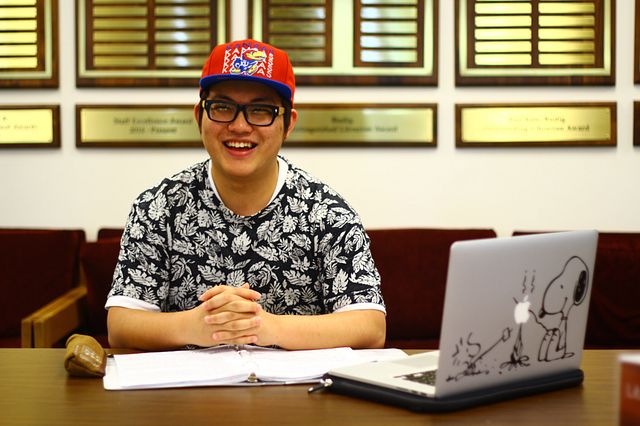 I chose to go to school in America because people from all over the world live in America, and I wanted to learn a lot about different people and their cultures. Another reason was because America is a very developed country, and is known for quality education.

Out of all of the schools in America, I chose KU because of their famous basketball team. When I watched KU win the national basketball championship in 2008, I knew that’s where I wanted to be.

Finally, I knew Lawrence was a small city, and that would help me focus on my studies.

One of my favorite things here at KU is my dormitory, Oliver Hall. I even started telling people to call me Oliver even though my real name is Yuhan Ye. One of the things I like about Oliver Hall, is that it has its own dining area, on the first floor, so I don’t have to leave the dormitory to eat.

I also like hanging out with my friends who live on the same floor as me. We just go from room to room spending time with each other and having fun.

I also hang out on my floor, and teach the students Chinese. I especially like hanging out with my friend Nic Warson, and I even taught him how to say “thank you,” “hello,” and “if you work you will succeed” in Chinese.

One day in my Geography 105 lab, our professor told us that we would have a shorter class and get out early. He told us we were going to be testing rock and sandstone that is found around volcanoes. But two and half hours later, my partner Justin Connolly and I were still working on our lab, and so was everyone else!